Apple has updated Siri so iPhone, iPad, Apple Watch, HomePod, and Mac owners can ask Siri about the upcoming World Cup. Now soccer fans around the world can stay up to speed on stats, scores and their favourite teams from their Apple devices.

In addition to updating Siri sports features, Apple is also highlighting soccer apps and games in the Apps store throughout the month. Features will include tips on taking the perfect football photo and how to "get your football fix" on social media. Highlighted apps will include FOX NOW and BBC Sport, while featured games will include FIFA Mobile and PES 2018.

Apple plans to feature World Cup articles in the News app through Eight by Eight magazine, and in Apple Music with featured playlists for each of the 32 participating nations. Podcasts will include a "The Beautiful Game" World Cup editorial collection, as will Books, with Apple highlighting World Cup related podcasts and book selections. 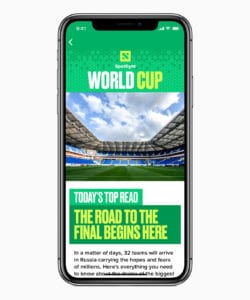 The TV app on Apple TV and iOS devices will feature World Cup coverage via FOX NOW,  TSN and RDS (unfortunately only available in the US & Canada), with fans able to follow their favorite teams through the TV app's Up Next feature.

The 2018 FIFA World Cup kicks off later this week on June 14 and lasts through July 15.

Should I Install Apps That Claim To Speed Up My Mac?
Screen Time, the feature parents keep asking us for?
iOS macOS Siri